Ireland has once again been named as the top-ranking destination in the world for attracting high value foreign direct investment (FDI) projects according to IBM’s 2015 Global Locations Trends report. This is the fourth year that Ireland has ranked at the top of IBM’s report as it continues to attract investments projects in industries characterized by high knowledge intensity and economic value added, such as life sciences and information and communication technology (ICT). Other high ranking destinations include Denmark, Sweden, Hong Kong, Lithuania, Germany, Switzerland, Finland and India.

According to the report, since 2010 there was a gradual decline in investment. This continued each year up until 2014 when a moderate recovery was made in both the number of projects and jobs created from FDI around the world. In the last year, job creation around the world has risen by 6% over the last year.

Once again the top destination for investment is the US, followed by China and then India. Other countries that have named in the top 10 destinations for investment include the UK, Mexico, Brazil, Thailand, Philippines, Vietnam and Indonesia. Because of Russia’s regional conflict in Ukraine and the investment barriers which followed, they have dropped out of the global top 20. 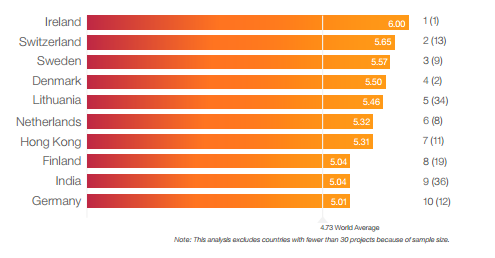 Ireland’s position as the top-ranking destination for quality and value of investments is based on global measures of productivity, knowledge intensity and occupational profile composition represented by wages and skills, and highlights the value and exceptionally strong contribution that foreign direct investment makes towards Ireland’s economy

Martin Shanahan, Chief Executive of IDA Ireland welcomed the ranking and added “Competition for FDI projects has never been as intense. IDA Ireland will continue to target blue-chip companies and the next wave of high growth companies in the coming years and capitalise on Ireland’s position as one of the top destinations in the world for Foreign Direct Investment”.

Disclaimer This article is for guidance purposes only. It does not constitute legal or professional advice. No liability is accepted by Company Bureau for any action taken or not taken in reliance on the information set out in this article. Professional or legal advice should be obtained before taking or refraining from any action as a result of this article. Any and all information is subject to change.