Company Bureau Formations LTD is delighted to announce that we have been named the National Winner for the Republic of Ireland in the European Business Awards. Company Bureau is now competing to win The Workplace and People Development award category across Europe.

Company Bureau has been chosen from 2,753 businesses named as ‘Ones to Watch’ in July of this year. The list included many prestigious Irish businesses recognised for their excellence such as PayPal, AppleGreen Stores and many more. After being selected as a National Winner by a panel of independent judges including business leaders, politicians and academics; Company Bureau now has the privilege of representing Ireland in the final stage of the competition.

Adrian Tripp, CEO of the European Business Awards remarked, “This is a significant achievement and Company Bureau is an outstanding leader in their field. To be chosen as a National Winner means you show great innovation, ethics and success and are one of the best businesses in Europe. We wish Company Bureau the best of luck in the final round.”

“We are thrilled to be announced as a finalist in the 2019 European Business Awards. To be recognised among so many prestigious companies is a great honour and a credit to our dedicated team that Company Bureau continues to be recognised as one of Ireland’s leading corporate service providers, offering a one-stop-shop for people looking to register a company in Ireland.

Company Bureau takes a progressive approach to the development of our staff, providing continued upskilling opportunities and college sponsorship to support career progression throughout the company.

Thank you to our staff who embrace every opportunity to further develop their skills to meet our clients’ needs and exceed expectations. I also want to give a special thanks to our loyal clients, without whom this achievement wouldn’t be possible.”

About the European Business Awards (EBAs)

The European Business Awards is one of the world’s largest and most prestigious cross border competitions across various business sectors. Now in its 12th year, its primary purpose is to support the development of a stronger and more successful business community throughout Europe. This year they considered applications from over 120,000 businesses from 33 countries of which 2,753 businesses were named ‘Ones to Watch’. Now Company Bureau has been chosen among 363 National Winners.

Next Phase of the Competition

On the 3rd and 4th December 2019, Company Bureau will complete a final round of judging in Warsaw, Poland. Representatives within the company have been invited to attend a Summit to engage in business issues, as well as a Gala Ceremony where the 2019 European Business Awards overall category winners will be announced.

For further press information or for case studies/interviews, please contact Andrew Lambe or Paula Horan on +3531 646 1625 or email formations@companybureau.ie. 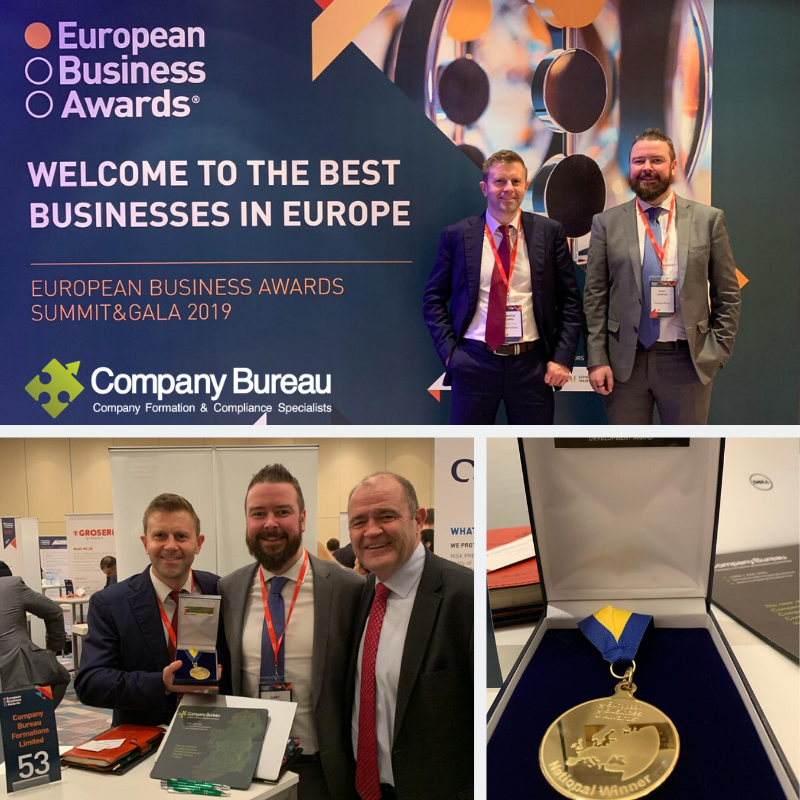 Ireland's leading Company Formation and Corporate Service practice, dealing with Company Registrations in Ireland and Internationally. With over 20 years of experience, you can be sure we will deliver an exceptional service on time. If you have any questions relating to this article, please contact us today and we would be happy to answer any of your questions.